For many years now, I have been playing squash all-year-round. I enjoy the game so much, I want to continue playing as much as I can, and quite honestly can’t see any reason for me to stop playing, or even reduce playing, at certain times of the year.

I found one previous survey that had been done but this doesn’t go into the level of detail I wanted:

Does squash have an official season?

I also asked the question on  the reddit squash forum recently. The question I posed was as follows:

I can understand why sports like cricket and football have seasons, as they are outdoor sports and are governed by the weather to some extent. But why does squash have a season – and just so I know, is there an “official” squash season? Does it vary with location? When is it? Personally, I play all-year-round, and am just curious when I read about start-of-season or end-of-season squash events. Can someone enlighten me please?

I received a variety of responses, such as:

These answers started me thinking about the need (or otherwise) to have an official “Squash Season”. Many of the answers I received related to the weather, but obviously this can’t apply world-wide, since if there’s an ‘official season’ then this might be largely in the Winter months in the northern hemisphere, but would be largely in the Summer months  in the southern hemisphere – provided the same ‘squash season’ was adhered to world-over.

So I decided to try to gather some more information about how many players are playing squash all-year-round. I wanted to know whether there’s any differences in number of players playing squash all-year-round by country, age group, etc. So I have compiled my own survey – please feel free to complete it (it’s only a few multiple-choice questions, and won’t take more than a couple of minutes to complete): 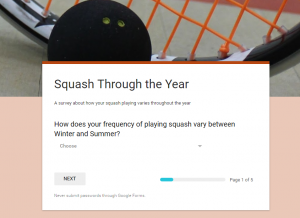 I will follow-up this blog post with the results of my survey once I have analysed the responses (assuming I get enough to enable me to perform some sort of analysis!!)

[If you are interested in seeing the final analysis, comment on this article so that you will be included on updates.]