The serve in squash

The serve in squash – is it really important?

The short answer is “yes” – it is vitally important to have a good serve when playing competitive squash. Equally, it’s very important to know how to return a good serve. So – what makes the serve in  squash a “good” serve?

Keep it in court

First of all, for a serve to be considered a good serve, obviously it has to not go out-of-court. This may seem like a very obvious and unnecessary comment to add, but throughout my career of playing squash, I wish I had a dollar/pound/euro for every time my opponent served out-of-court – giving me a very easy point! When you are serving, it’s the only time in a game that you can decide when to hit the ball, and where, without being pressured in any way by your opponent. It’s all entirely up to you – so take your time, prepare yourself well, decide ahead of time where you want the ball to go, how hard to hit it and where you are going to move to as soon as you have done so (almost certainly you should be moving to take control of the “T”).

When is a serve a valid serve?

What makes a serve valid?

The ball must then bounce on the floor (unless struck by the receiver beforehand) somewhere behind the ‘short line’ on the opposite side of the court to where the server is serving.

The server must also have at least one foot (or part of one foot) touching the floor, clear of the red lines and inside the service box. Note that the entire part of the foot that’s touching the floor must be clear of the lines. Although this rule is not generally enforced rigorously (watch a few professional matches and you can see examples of players sometimes breaking this rule, but not being ‘called to account’ by the referees), it is a rule and so players should get in the habit of abiding by the rule when serving.

Make it hard to return

So much for making it a legal serve but how can you make the serve in squash a “good” serve? The short answer is “when it’s hard for your opponent to return, or causes them to make a weak return”. For different opponents, this will mean you have more or less options – depending on their playing ability. Against weaker players, you may find that a low fast serve is very effective – catching them off-guard and causing them to rush their return or even miss the ball altogether. This tactic is unlikely to work with experienced players, though, and you will probably find that a low, hard serve gets given short change by them – often being driven straight back before you have time to position yourself properly.

Against more experienced players, almost always the best serve is one that hits the side wall before they are able to hit it. This already places them under some pressure, as they must first work out the trajectory of the ball and when will be the best time to strike the ball. If you can also manage to get the trajectory of the ball such that the ball hits the side wall right in the most awkward place for them to return it, then that’s a “good” serve. For a right-handed player, receiving the ball being served from the right-hand service box, this usually means aiming for a point on the side wall high and level with where they are standing. The following diagrams show this in better detail. 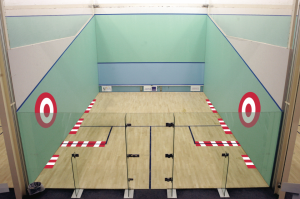 Where to strike the side wall….

This type of serve will cause the opponent to have far less options for their return. In many cases, it will result in a weaker return of serve – often a weak cross-court shot ending up mid-court, that you can easily dispatch using either a drop to the front wall or a strong drive down the wall.

It’s true – in order to get to be able to serve like this with consistency, you need to practice it – again, and again and again……. The serve in squash is such an important part of the game that it is definitely worth spending time on it practicing – to get it right. After all, as I said at the beginning of this discussion, the serve in squash is one time in the game when you can take as long as you like (well, within reason!) to prepare to make your shot – and done right, you are well on your way to already winning the point!

This entry was posted in For Beginners, General, Playing hints and tips, Rules of the game. Bookmark the permalink.