Squash and old age – Up to what age can you still play squash?

Squash and old age: I thought I was pretty old to still be playing squash (at 64) – but then I saw the latest post from England Squash about the British National Championships currently taking place in Manchester, UK.

This encourages me no end, and I have set myself a goal to continue playing until I’m 80 years old 🙂 – at least !! 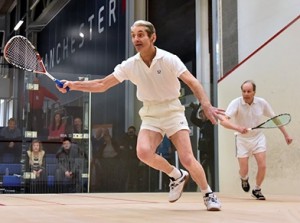 Two of the competitors in the over 75’s tournament

The above picture (courtesy of England Squash) shows one of the “Masters” matches where the Men’s Over 75’s saw two of the oldest players in the tournament gracing the court as 79 year old Patrick Kirton defeated 80 year old Lance Kinder, playing in his 30th Nationals.

On a more serious note, this just shows how squash and old age are not necessarily mutually exclusive. I think the trick is to keep playing into your old age, rather than taking up the sport when you reach 55, for example – although there are people who have done this successfully too. Speaking for myself, I can say that my game has changed considerably during my 50 playing years. My game is a lot slower now, but I concentrate much more on accuracy and placement of the ball. If I can stand on the “T” and get my opponent running around like a madman, then that’s exactly how I like it! 🙂

I also have come to realise that sometimes playing a slower game is the best way to infuriate a much younger, fitter opponent, who is hitting the ball hard (often far too hard) and doing a lot of running. As you becomes older, there are less options open to you, and this style of play is pretty much the only one – so you had better perfect it and get very good at it!

This entry was posted in Competitions, Squash News, World Squash Tournaments and tagged age, competitions, over-75. Bookmark the permalink.

6 Responses to Squash and old age – Up to what age can you still play squash?