Another type of squash competition is the “ladder”. Ladder competitions are usually run for individual players, rather than teams. This type of competition requires very little ‘maintenance’ and generally is the type of competition run by a club where the players do not want to be tied to playing frequently, but want to just arrange a game with another player of a similar standard from time-to-time.

In this case, all players are arranged in one long list. The aim of each player is to rise up the ladder as high as they can by challenging players above them and if successful, they move above the player they beat.

As players rise up the ladder, they will find more players from below will challenge them in turn, trying to beat them and thus causing them to move down again.

Ladders tend to just run on and on without any specific time constraints, although they can be re-started from time-to-time. You can find a very easy way to manage this type of ladder on SquashLeagues.org main website – check here.

A knock-out competition (sometimes called an elimination competition) involves holding matches between a pair of players and as the name suggests the loser of the match is knocked-out of (or eliminated from) the competition.

The winner proceeds to play a match with another player and again the loser of that match is knocked-out of the competition. Typically the whole competition would take place over a period of only less than a week – possibly only one or to days – as the total number of matches played is reduced (compared to a round-robin competition).

Since each match results in one player being eliminated from these types of squash competitions, the number of matches required is easy to work out – it’s simply equal to one less than the total number of players that have entered the competition. Thus if 28 players have entered the competition, there will be a total of 27 matches played before the winner can be declared. Often, there is also a play-off for third and fourth places – requiring one additional match to be played.

In addition, There are several variations and nuances for these type of squash competitions, and it does require quite a bit of preparation and control if all this is done manually. For example, to make the competition more exciting (i.e. so that the best players are more likely to end up playing each other only in the latter stages of the competition) players can be ‘seeded’. This means allocating a ‘seed number’ to the best players with number 1 seed being the player most likely to win the competition and the number 2 seed being the next most likely, etc. The seeding of the players is most often based on the past performance of the players 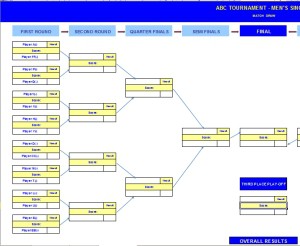 If you do decide to run a knock-out competition, you may want to consider using handicaps as a way of balancing players skills. This post explains more about this type of squash competition.